Published in the Companies & Markets Section of Business Day, 1 March 2018. 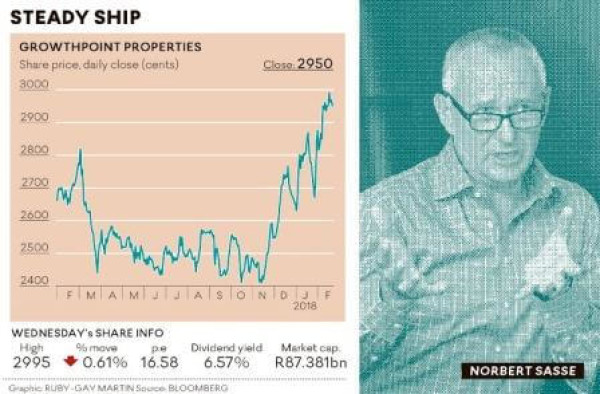 SA’s largest property company, Growthpoint Properties, is sticking to its knitting and not taking any extraordinary risks while its competitors face a host of challenges, according to CEO Norbert Sasse.

Sasse spoke on the sidelines of the release of the group’s financial results for the six months to December, which he said was the toughest half-year period for the real-estate investment trust (Reit) since the 2008 recession.

Growthpoint posted distribution growth of 6.5% per share, meeting its guidance, while it grew its asset base to R127.7bn.

Similar dividend growth was expected for the full year to June 2018. Growthpoint increased its total distributable income by 10.6% from its prior half year to a substantial R2.9bn.

Sasse attributed this positive performance to strong contributions from the V&A Waterfront in Cape Town and its east European arm, Globalworth Real Estate Investments. The company looks set to be a reliable performer in 2018, with Sasse confident that the economy will gain momentum. While some offshore-focused JSE-listed property companies’ returns have been weakened because of the stronger rand and some have been sold off due to the perception that they were overvalued, Growthpoint’s strength has been that it has continued to run a diversified but risk-averse strategy, according to Sasse.

“While the listed property sector’s overall returns have been weak in 2018 so far, this is because of mostly the Resilient group of companies. “Those companies are not traditional property groups as they use various financial engineering techniques and we’ve seen a sell-off of their shares as they were perceived by some to be overvalued,” Sasse said.

Meanwhile the likes of Growthpoint, Redefine and Vukile — which operate more like traditional property companies — are actually trading at 52-week highs.

“Growthpoint’s message to shareholders is that we will remain a reliable, conservative group that meets its dividend targets while maintaining and gradually enhancing the value of its assets,” said Sasse.

The stock continued to deliver reasonable returns on a steady basis, with overall vacancies below 5%, gearing near 35% and positive portfolio revaluations. Anchor Stockbrokers research analyst Wynand Smit said it was notable that Growthpoint had highlighted “the trend of a slowdown in new retail supply, on the back of retailers being reluctant to grow their footprint in SA”.